The amount of money fraudulently spent using contactless payment cards and mobile devices has increased by £4.2m as their usage across the population has become more widespread.

A judge recently slammed the technology, which does not require a PIN, for making life “too easy” for criminals during the sentencing of a fraudster in Devon.

Contactless cards can be used for transactions of up to £30. 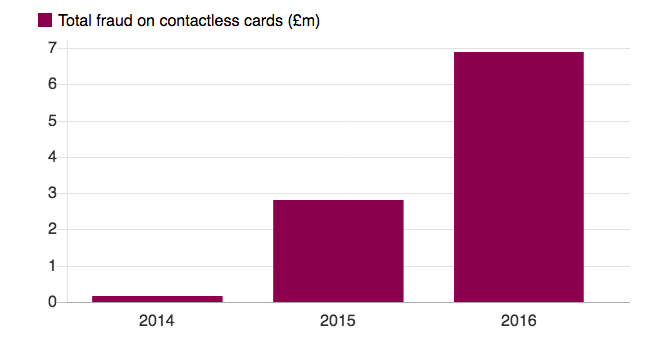 Gareth Shaw, money expert with consumer group Which?, said there are “still questions around the security of these cards”.

“Card companies must be responsible for striking a better balance between convenience and security,” he said.

Bethan Davies, 37, works for a communications agency and had around £200 stolen from her contactless card after losing it on a night out in central London last summer.

She cancelled the HSBC card the following morning, but noticed further activity over the next two weeks.

She said: “I’m quite fastidious at checking my statement and I saw loads of small transactions coming out, from places like Tesco, food and wine shops and weirdly a dog grooming parlour in North London.

“Because the transactions were small, from a couple of quid up to £12, they went under the radar and were still being authorised.”

She said money was refunded straight away.

An HSBC spokesperson said: “We cannot go into any detail of how our fraud systems work but customers are protected against losses from this type of fraud.”

Student Hatty Sharp, 22, had her card stolen while shopping at an Aldi in Southampton.

She said: “I immediately cancelled my Santander card, and then phoned up to cancel my HSBC card, but was put on hold for 15 minutes. In this time the thief had gone to the off-licence around the corner and spent £17, I presume on alcohol.”

She reported the crime to the police, and was fully refunded within two weeks.

How to use contactless safely

Andrew Bailey, chief executive of the Financial Conduct Authority said: “The overall risk is low” but added “we have been urgently working with card schemes and banks to ensure this issue is fixed.”

In a letter to the Treasury Select Committee earlier this year, John Griffith-Jones, Chair of the Financial Conduct Authority said “public confidence could be eroded without further action”.

Richard Koch, Head of Policy at The UK Cards Association, which represents card issuers, said: “All contactless cards contain robust security features including an in-built security check which triggers the need to enter a PIN at certain points.

“Customers are fully protected against any losses and will never be left out of pocket in the unlikely event they are the victim of this type of fraud, unlike if they lose cash.”

A brief history of contactless